The Independent Republic of Sealand

Published by Andres Guadamuz on January 22, 2007 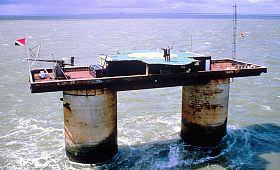 In a move that reminds me of the plot in Neal Stephenson’s novel Cryptonomicon, the popular torrent search engine The PirateBay has started asking for donations to purchase the independent micro-nation of Sealand. The people behind PirateBay have created a website to ask for donations to amass the £65 million pounds required to purchase this principality, which looks remarkably like a platform in the middle of the sea (pictured). Sealand is an abandoned concrete platform 10 kilometres off the coast of Suffolk. It was taken over in the 60’s by Paddy Roy Bates, a retired British Major, who declared the platform an independent state and himself a prince (which explains the principality moniker).

The legality of such claim seems doubtful. I’ve been doing some research on the topic, and there is surprising number of articles on the subject of the legality of the Principality of Sealand. There has been a court case in Germany denying one of its citizens the loss of his German nationality in favour of the principality. Apparently, In Re Duchy of Sealand is an often cited case in International Law in order to establish the requirements of statehood. Sealand is also famous because it has established a number of servers for providing data-haven services, and therefore international interest has re-surged, as it is used also as a tax-haven.

What is required for statehood? The Arbitration Commission of the European Conference on Yugoslavia describes a State as “a community which consists of a territory and a population subject to an organised political authority.” It is doubtful that the platform consists of a state. It is also clear that no country has recognised Sealand. Nevertheless, the platform still exists, and the UK doesn’t seem willing to exercise sovereignty.

The best analysis on the subject comes from Goldsmith and Wu in their excellent book Who Controls the Internet: Illusions of a Borderless World. Sealand is used here as an example of unregulated borders, much like the Barlowian view of Cyberspace. Their argument is that it doesn’t matter if a micro-state attempts to extricate itself from the rule of law, as the citizens of that country would still have to operate in real countries, in the real world if you may. I tend to agree with this view. The UK doesn’t need to exercise its jurisdiction over Sealand, the inhabitants of the platform must go into Ipswich for food and supplies from time to time. The servers must connect to the rest of the Internet somewhere. Regulate the choke-points and you have regulated the platform.

As of today, PirateBay has received $18 thousand USD in donations, which must prove something profound about the nature of the Internet which I cannot fathom this morning. However, something must be said about the state of mind of some of the donating parties. How is it that someone who will not fork out twenty quid for a boxed-set DVD willingly gives money to a dodgy outfit so that they can buy a doubtful country?

Nevertheless, I’m half tempted to join them and donate something. Apparently, all of those who donate money will be sure to gain citizenship. The possibilities are intriguing.

Hi Andres,Your analysis, as usual, tips far too far into a purely legal positivism neglecting the fact that International Law is in fact an illusion. It is the political moment that forms itself into a political community that is the crucial nexus between anarchy and sovereignty and at that moment that law can begin to come into being. That is, that law is not an a priori fact but rather a subsequent construction – law is not found it is made. Really this comes down to the fact that the law is a mode of being for the State and that as Agamden perceptively pointed out, Sovereignty is the 'power to decide the state of exception'. That sovereignty is never held within law as it is external (and I would argue – prior) to it should alert us to the fact it is impossible to define sovereignty, nationhood or statehood within law – particularly as law is always a bordered locale. To talk about International Law is really to talk about power. BestDavid

Apparently the owner of Sealand has already said he isn't prepared to sell to Pirate Bay, at any price, because he doesn't approve of what they're doing.

Hello David,Interesting points, and while I do reckon that I often tend to be lured by the black letter of the law, I would not claim to be a Positivist. Kelsen gives me heartburn. I'm more of a Realist really. I think that you over-emphasise my legal argument over the pragmatic one. While to me it's clear that according to international law Sealand has no claim whatsoever to nationhood, the status quo is maintained by a lack of interest from the State to excercise its power. I guess this makes my opinion closer to Agamden's than I would otherwise like.

Hello John, Thanks for the heads up, I guess they will end up buying an island (which is Plan B).

GameStop, Musk, and the threat to decentralization

One of my favourite phrases from Gabriel García Márquez can be found in The Autumn of the Patriarch, and reads: “El día que la mierda tenga algún valor, los pobres nacerán sin culo.” (The day Read more…

The events of last week require no introduction. The world looked in shock as the QAnon-MAGA mob stormed the US Capitol, disrupting the certification process for the US election. Disbelief, anger, sadness, in some circles. Read more…