Why do I get the impression that someone somewhere has declared open season on Google? The Google Book Search deal is under scrutiny from anti-trust regulators in the US; Jeff Bezos thinks that the settlement is a bad idea; it has even been criticised for bad design decisions.

Although I share some concerns about the Google settlement with publishers (e.g. exclusive rights to sell orphan works), I think that it is generally a good deal for the publishing industry, as it opens new market opportunities to sell out-of-print books. However, I am more concerned about the threat from competition law. Some of my work into networks has been looking precisely at how dominance in networks comes about, and I believe that regulators should take this into consideration when scrutinising dominant companies online.

To make a long story short, some type of networks have special characteristics that may be conducive towards the creation of large hubs. The Internet is a scale-free network, that is, it is a network that displays high clustering and where some nodes have a disproportionate number of incoming links. Under certain circumstances, nodes can undergo a runaway accumulation of links, in other words, the rich-get-richer, following patterns that are often best described in gases through Bose-Einstein condensation. This collapse in competition is often independent of the actions of the component elements in the network, so it might be futile for regulators to try to stop it from happening. Nobody knows when one such condensation occurs, but when it does it creates a super-hub, much like what we see with Google. 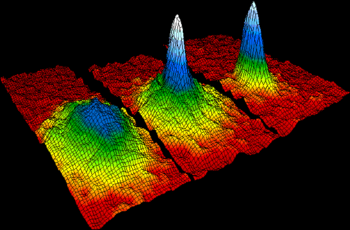 So, Google may be suffering from its own success, but this is probably independent of its own actions. Its dominant position has come about as a serendipitous accumulation of links, and should not be subject to competition law.

Before anyone makes any comparisons, I’m not standing under a blanket with mascara running down my face.

There's some doubt over whether the Internet is in reality scale-free. See this paper "On the disconnect between theory and reality in the study of the connectivity of the Internet" http://www.ams.org/notices/200905/rtx090500586p.p…

Thanks very much for the link! Crap, I may have to re-write some bits of my book if this bears out.

I've just read the paper. Very interesting, but it seems to have a big bone to pick with one study in particular, while it seems to ignore some of the other research into scale-free characteristics of the Internet. I agree that traceroute is useless to measure node length.

The disinformation factory, or why YouTube loves the Flat Earth

A few months ago something interesting happened. I’m currently on sabbatical, so my days are spent in a combination of reading, researching, writing, and procrastinating by watching YouTube videos. I came across a very interesting Read more…